Ways that Media has been used to Enhance Spectator Appeal

Athletics a has always been a high watched and anticipated sport. The olympic game has been televised since the 1930s and the most watched sport during the games has always been track and field. The 1956 Melbourne Olympic Games was the first Olympic games to be televised internationally this was the first time broadcasting rights were ever used in televising sport. Technology has increased spectator appeal allowing people all around the world to tune into the event via television and in recent year through internet live streams. Internet live stream give an element of appeal that some fans like. It gives the opportunity of people who can't make an event to still talk with fans through chats and give feeling that they are within the crowd. During these live streams usually replays are shown which can't be shown at the venue. Australia athletics have recently started a live stream service which lives streams both major and minor events within the athletics calendar.


Social media now place a major role in athletics. Social media allows the fans to connect with the athletes after of before the event has begun. Athletes also tend to social media to promote themselves such when a athlete may do Q&A on their social media pages but will usually revolve around sponsorship deals. Most athletes have their own website were you can really get to now the athlete's background and history within the sport. These websites will have links to their sponsors and merchandise  The increase use of social media among athletes has drastically increased the spectator appeal. 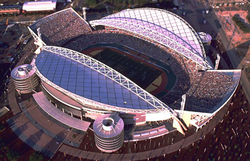 Improved Stadiums have allowed the event to succeed in delivering an amazing track and field experience. Live events usually have more things going then may appear on the televised event or live stream, sometime on the new screens ranging up to 50m long and 20m high they may display a highlight or background clip on the athletes which is about to enter the stadium. The stadiums have been drastically scaled up as well increasing the size of stadium to hold colossal numbers of people. For the 2000 Olympic games in Sydney the stadium which hosted the athletics held up 114,000 people which makes it the 3rd largest stadium based upon capacity, the size of the stadium has since been reduced to 90,000. These stadiums have increased the spectator appeal by increasing the atmosphere of the crowd