How Does it Work 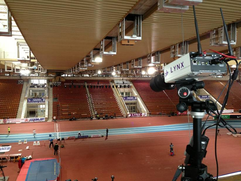 In track and field they use a photo finish to accurately determine the placings  of racing events. Digital cameras are used for modern track and field events, historically film was used. The advantages of using Digital cameras are that they use a 1-dimensional array sensor to take 1-pixel-wide sequential images of the finish line. Since only a single line of the CCD is read out at a time, the frame rates can be very high  up to 10,000 frames per second. They are be triggered by a laser or photovoltaic means.  The 2008 Summer Olympics saw the introduction of some of the fastest timekeeping equipment yet, with cameras that take photographs 3,000 times a second.

Where was the Technology Discovered

In a sport like track and field all the competitor can potentially be within 0.1 of second within each other, its almost close to impossible for the human eye to identify the accurate placings. On many occasions place getters can actually run the same time, the only way a winner can accurately be distinguished is by a photo finish. Athletics is eternally improving sport, records can be broken by only 0.001 of a second. Athletes spend their whole lives training trying to break records, a photo finish is best way to accurately get the precise time From 2005 to 2006 the 100m world record was broken 4 times, the world record progressed from 9.768 - 9.766 - 9.763 - 9.762. On average most olympic finals are won by only 0.05 of a second.  The photo finish has helped improve the accurate timing of track and field and ensures a competition standard for records which helps stop controversy of inaccurate timing.

When is the Photo Finished Used 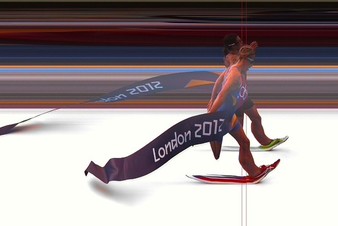 Photo finishes are widely used throughout modern tack and field. The main application of the photo finish is for sprinting events such as 100m, 100/110m hurdles, 200m, 400m. The 100m can last only 9.5 seconds the time difference between each of the places is so minimal. Athletes can tend to make comebacks towards the end of the race ( an example of this is the video below). Its not only the 100m that can only be separated by a photo finish. In the 2012 olympic games in London. The women's triathlon winners were so close it had to be decided  by a photo finish. The event was a 1.5km swim then a 40km bike ride followed by a 10km road run. Its hard to believe that such a long event can end in a photo finish. This is the first time an Olympic triathlon result was decided on a photo finish