How does the Track Surface Work

Tracks are built and designed around the natural movement of the human body. The first part of the human body to hit the track is the foot, professional sprinter can produce up to 4 to 5 times their body weight though this motion, Usain bolt produces 475kg of force while running. The bottom of the track is shape to be a hexagon pattern, this pattern is makes the track work exactly like the foot. While sprinting athletes only use the fore part of the foot. The foot lands laterally on the 5 metatarsals, this is the time when the athletes express 4 to 5 times their body weight. The track one of the tracks purposes it to absorb the energy to help prevent injury, the track helps to do this by storing the potential energy in the track. The athlete foot will then move from the 5th metatarsal to the 1st metatarsal, this motion will cause the foot’s arch to increase the the energy. The arch is a movement that athletes are taught to reduce the risk on injury. On a grass or ash track the energy would be lost but the track allows the push forwards with the 1st metatarsal to release all the stored energy increasing performance and reducing injury.

Where was the Track Surface Invented

Starting in the late 1950s, artificial surfaces using a combination of rubber and asphalt began to appear. An artificial warm up track was constructed for the 1956 Summer Olympics in Melbourne, Australia. During the 1960s many of these tracks were constructed, examples still exist today. Their survival are a testament to the durability and inconsistency of these early attempts.In the mid-1960s Tartan tracks, surfaced with a product by 3M. The name Tartan is a trademark, but many have misused it as a generic trademark. This process was the first to commercialise a polyurethane surface for running tracks, though originally conceived for horse racing

How well does the Track improve Performance 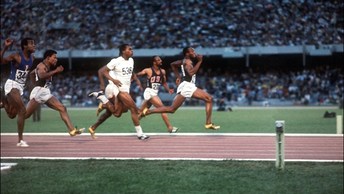 Synthetic tracks for the purpose of track and field are widely used through out the world. The majority of countries would have multiple synthetic tracks available for their athletes. The notion that these synthetic tracks can dramatically increase performance is well known. Most countries are purchasing these tracks to help develop their country's level of athletic talent. The main reason synthetic tracks track are so wide spread is country want to try build that potential talent within the sport through youth athletes. In most cases the government give grants to local communities to build these tracks, but when in a situation where the government can't afford to get these facilities ranging from upwards of  $1,000,000, the believe is brought up the these athletes are training at a disadvantage compared to the athletes that live in countries which can afford these training luxuries. Another problem that is faced when poorer countries buy these expensive high quality tracks is that athletes may have to travel from rural area to get to these facilities.